Well, MSTies, I had the pleasure of attending this year's Comic Con in San Diego, CA that took place from 7/24-7/27/08.  This was the first convention of its kind, or any similar kind for that matter, that I have been able to make it to.  Sadly, I was never able to get to any of the official MST conventions due to other schedule conflicts or commitments.  I was hoping this might make up a little for those missed opportunities and for my part I have to say it did.

I attended two and a half days of the four day convention, having arrived mid-day Thursday and left Sunday mid-day.  In between I was able to catch pretty much all the MST related events, along with a few other panels and created some memories that will last a lifetime.  The whole weekend seemed to teeter between devastating disappointment and then far exceeding my expectations.

To start off I have to relate the story of my flight from Detroit to San Diego.  I wanted as early a flight Thursday morning as I could get so I booked seats on a 7:30 Northwest flight for myself and my nephew Rick Schumaker, a fellow MSTie and the person who helped me create and develop the look of my web site.  We arrived at the airport early, printed our boarding passes, went through security with no problems and moved to our gate to await the flight.  As we sat there we realized that none of the Arrival/ Departure boards mentioned our flight.  Only then did I notice on the boarding pass that I had booked a 7:30 PM flight.  We were in danger of missing the entire first day of the Con.  We quickly found out that there was a 10:30 AM flight, but it was booked full.  We got on the stand by list and settled in to see if everyone showed up.  With ten minutes to go before the flight left there were still five no shows.  Just when we got our hopes up four of them showed up and got on the plane.  The gate attendant asked if we wanted to use the final seat, but we had already decided if we both couldn't get on we would wait for the late flight.  Literally, just as the doors were closing one of the passengers just walked off the plane and started to walk away.  When the gate attendant ran him down it was very obvious he was extremely drunk.  He had just decided he couldn't make the flight and staggered off.  The attendant looked at me and said "we've got two seats if you want them" and we ran to the plane.  About four hours later we landed in San Diego.  Thank God for alcohol.

Here are some of the items I had the gang sign.  One point of explanation: at the very first signing on Thursday I mentioned to Kevin I had just seen him a few weeks before at his show in Saginaw, MI.  Bill overheard that comment and said that he liked the sound of "Saginaw Tom" so that's how he signed.  When I saw Bridget she asked what Bill's comment meant.  I explained I had been to Saginaw, but I wasn't actually from there.  She just sort of rolled her eyes and said "That's the way Bill's brain works."  Too bad I didn't get a chance to have Jim, Paul and Josh sign. It would have been nice to get the whole gang. 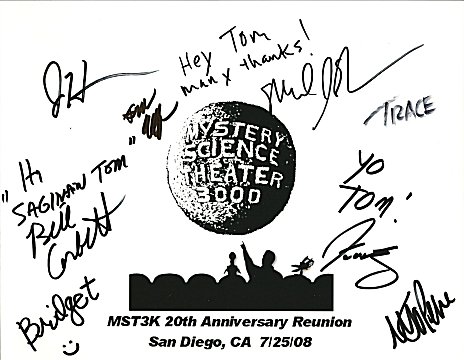 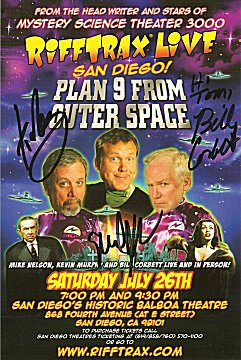 I thought I'd throw some of my favorite pictures from the convention floor in here.  This was truly an interesting assortment of fans and fanatics.

I had made my return flight arrangements before they announced the Sunday morning Radio Adventures of Dr Floyd event featuring Frank.  Sorry I had to miss that, but I have no complaints about my entire weekend.

I'll close with a few things I learned during the convention:

That's my report.  I hope you enjoyed at least some of my ramblings.  Thanks once again to all the MSTies I had a chance to meet, all the fans and freaks at the convention and of course the wonderful cast and crew of MST3K.  So what are the plans for the 25th anniversary?