A few MSTies have asked me where the heck I came up with a name like
Tom's Temple of MST3K Stuff.  Here's the story.

I originally created this website with the intention of just posting pictures of all the things that had been sold by Best Brains, Inc over the years.  I had put together this fairly huge collection of MST stuff and I thought maybe people would like to see it since I had never seen many of the items on other websites.  When I began to look for a name for the site I immediately went back to all the merchandise catalogs sent out by Best Brains.  Going way back to 1990 they came in the semi-annual newsletter and were called the Mystery Science Theater 3000 Price Rebel Icon Merchandise Temple Catalogue.  By 1994 they changed the catalog title to Great Stuff You Can Buy, which is the name still in use today.  I simply pulled TEMPLE from the  first name and STUFF from the second and came up with the name Tom's Temple of MST3K Stuff.  Once the website was started it quickly grew to include a history of the show, sounds, and lots of photo and information other than the stuff that was sold.  I decided to keep the original title anyway.  End of story.  Now you know. 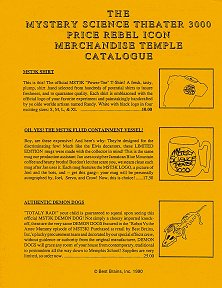 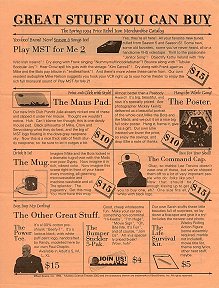 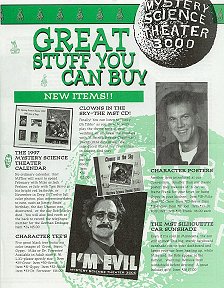